A specific radioisotope is used in millions of important medical imaging regimens each year. Other isotopes are required for certain types of cancer research and some might be used in new types of cancer therapy. There are supply problems for each of these isotopes, but a solution exists: both isotopes can be produced in a certain type of advanced nuclear reactor, a molten salt reactor (MSR). How these reactors work, and how they are particularly well suited to alleviate these isotope shortage problems, will be described below.
Molybdenum-99 (Mo-99) is a radioactive isotope of the element molybdenum, whose decay product, technicium-99, is used extensively in nuclear medicine imaging. As such, a reliable supply of Mo-99 is a necessity for modern cancer treatment. Unfortunately, the supply of Mo-99 is now being threatened because of political and economic factors.

First, most of the world’s supply of Mo-99 comes from outside the U.S. where it is made in research and test reactors that use highly enriched uranium (HEU) targets. The HEU is provided by the United States. Under a 2013 U.S. law, the United States must cease exporting HEU by the year 2020. It will begin to phase out export of HEU because of fear that this material could fall into the hands of organizations that would use it to construct weapons. But as a result of this mandate, foreign reactors, should they remain operational at all, will be forced to use less efficient low-enriched uranium for isotope-making targets, thereby reducing the Mo-99 supply here in the U.S.
Second, many of the reactors that do produce Mo-99 are now aging to the point that they no longer function reliably. As a result, overall Mo-99 production continues to decrease and, on occasion, has stopped completely for short periods of time. There is every reason to believe that without significant financial intervention the supply of Mo-99 will continue to decrease, which will degrade the effectiveness of cancer treatment. Clearly, this is unacceptable.

In the United States there are currently no major suppliers of Mo-99 for medical imaging use, although that same 2013 law requires that the U.S. become self-sufficient in producing it. Reactors and cyclotrons could be built for production of Mo-99, but a much better solution would be the construction of a few small multipurpose liquid-fueled molten-salt reactors (MSRs). Just a few of these MSRs could produce sufficient Mo-99 to meet the country’s needs, and this would satisfy Congressional legislation mandating domestic, affordable, and proliferation-resistant radioisotope supplies for medical use. Such reactors, optimized for enhanced radioisotope production, would provide a commercial product worth billions of dollars, while eliminating the risk of theft of high-enriched uranium targets. 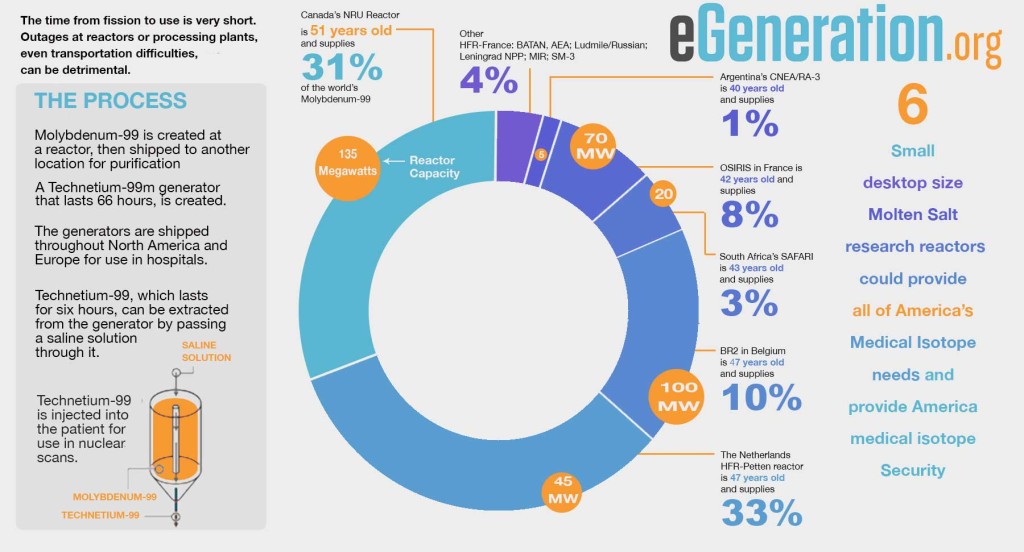 A molten salt reactor (MSR) is a type of nuclear fission reactor which uses molten salt rather than high-pressure water as its primary coolant; in its modern form this coolant is the liquid fuel itself. The use of molten salt allows the MSRs to run at higher temperatures than conventional water-cooled reactors, making them more efficient, and because there is no need for a pressure dome, far safer. For example, should the plant begin to overheat due to a natural disaster or serious malfunction, the liquid fuel automatically drains from the core, which will bring the nuclear reaction to a halt.
Of particular interest to us are MSRs of the type known as liquid fluoride thorium reactors (LFTRs — pronounced “lifters”) that use, as fuel, the plentiful metallic element thorium dissolved in a fluoride-based molten salt. A discussion of the many technical advantages of LFTRs over currently used light water reactors is beyond the scope of this monograph, but one striking advantage of LFTRs is that they produce copious amounts of Mo-99 as a byproduct. In addition, these LFTRs uniquely provide the radioisotopes Actinium-225 and Bismuth-213 — currently all but unobtainable — which have the potential to be used in new types of cancer treatment now being developed (described below).

THE ECONOMIC IMPACT OF RADIOISOTOPES

Historically there had been a debate in the nuclear industry as to which was more valuable; income streams from the electric power produced by nuclear power plants or profits from the by-products of their operation (stable and radioactive isotopes and nuclear materials.) Among the industry experts the opinion prevailed that nuclear reactors made the most money from electric power production that turned out not to be accurate.
In the early nineties, the U.S. Council for Energy Awareness, the USCEA, commissioned detailed research of the income streams of nuclear power and isotope and material technologies on the national economy (excluding the military). The final report surprised the entire industry. The total annual revenue connected with radioisotope applications in the United States was $257 billion dollars in 1991. This was three and half times more than that earned from production of nuclear electric power ($73 billion).
In addition, 3.7 million people in almost five hundred specialties were employed either directly or indirectly in radioisotope and nuclear materials industries. Together, these industries account for about three percent of full employment in the USA.

Production of medical radioisotopes has become the most important sector of the nuclear industry, accounting for more than 50% of annual radioisotopes production worldwide. Today more than 160 radioisotopes of 80 chemical elements are produced for use in diagnosis and therapy of cancer, as well as cardiology, hematology, urology, nephrology, and other specialties.

Molybdenum 99 (Mo-99) is one of the radioisotopes in greatest demand. It is used in Mo-99/mTc-99 (metastable Technetium-99) generators widely used in diagnostic scans in cancer and cardiovascular diseases, the diseases that are the leading cause of death in Americans. More than 80% of radio-diagnostic procedures in the world are carried out by preparations labeled with mTc-99, according to IAEA (International Atomic Energy Agency) reports. Currently, about 30 million diagnostic procedures are carried out worldwide annually with mTc-99; world consumption of Mo-99 /mTc-99 has exceeded 12,000 curies per week at a cost of $3.7 billion. About 95% of Mo-99 production happens in Canada, the EU and South Africa.

As recently as 2012, there was a series of unplanned stoppages of the reactors producing Mo-99, mainly due to the ageing of these reactors; this demonstration of the imperfection of the existing system of supplying this vital isotope has caused growing concern for the future of nuclear medicine. These problems in Mo-99 production had a negative effect on treatment of oncologic patients in Europe and Northern America. For example, during these shortages, supply of Mo-99 /mTc-99 generators in some British hospitals was reduced by 30% from normal. For the duration of the shortage, the doctors had to choose which patients most needed 99mTc-based procedures.

In addition to the Mo-99, other diagnostic radioisotopes used by the medical community can be processed efficiently by LFTRs. These include Strontium-89, Xenon 133, Iodine-131, and Yttrium-90. For example, recovery of Strontium-89 is about 1,000 times more efficient from a LFTR compared to solid-target-irradiation of Strontium-88.

Actinium-225 (Ac-225) has a half-life of 10 days; during its decay it emits four alpha particles for every disintegrated atom. Thus a milligram of Ac-225 emits about a million trillion alpha particles during this time. As described below, even a single alpha particle will kill a cancer cell if it is close enough to it.
This radioisotope is currently only available as a consequence of rare radioactive decays. However, Ac-225 is produced in large amounts in a LFTR, so production of this radioisotope for cancer research becomes one of the rationales for developing LFTR technology.
Bismuth-213 (Bi-213) decays with a half-life of only 45.6 minutes, to 209Bi (stable), during which, it emits one alpha particle. As is the case for Ac-225, a LFTR is the only practical way of producing this isotope in reasonable quantities.

Cancer is one of the main health problems of today. While the treatment for some cancers has been very successful, improvements over the years for others has been much more modest. A particularly difficult situation occurs in so-called Stage IV disease where the primary cancer has spread or metastasized throughout the body. Although chemotherapy, hormonal therapy and targeted agents can definitely prolong life in those situations, outright cures are unusual. New therapeutic approaches are therefore definitely needed.

Targeted Alpha Therapy (TAT) is a possible new approach to treating such patients. TAT is based on the coupling of an alpha-emitting radioisotope to a tumor selective carrier, usually an antibody. These antibodies recognize tumors through tumor-specific antigens (proteins) that are expressed on the tumor cell surface, and can bind selectively to these cells, similar to a key fitting into a lock. In TAT these carrier antibodies serve as vehicles to transport the radioisotopes to the cancer cells.

Radioisotopes that emit alpha particles seem particularly promising to selectively destroy cancer cells. Alpha particles have a high energy, in the range of 5-9 MeV, and discharge that energy along a very short path length. In human tissue this length is typically less than 0.1 mm, corresponding to just a few cell diameters. It has been shown that just a single alpha particle striking a cell nucleus can shatter the cell’s DNA beyond repair, utterly destroying the cell, and even tiny amounts of alpha-emitting radioisotopes emit trillions of alpha particles each second. But if the alpha emitter is not stuck tightly against a cell, all these alpha particles will be stopped harmlessly by the fluid and connective tissue between cells, and rendered harmless. So the only cells that are killed are those that are directly bound to the antibody.

Many technical problems need to be overcome before such a scenario can be used for cancer therapy, not least that manufacturing tumor-specific antibodies is a very difficult task. Still, some progress is being made in this area, and the routine use of highly pure (monoclonal) antibodies, with or without radioactive attachments has become routine in the treatment of lymphoma. Importantly for our purpose here, studies looking at the value of attaching alpha emitters to such antibodies are hampered by a lack of suitable radioisotopes such as Actinium-225 and Bismuth-213. Both of these are byproducts of a LFTR, but they are not easily obtainable in any other way.

TAT may also be suitable to prepare leukemia patients for bone marrow transplants. Linked to an antibody (CD-45) which binds mainly to bone marrow cells of all types, it can, theoretically, destroy a patient’s bone marrow that harbors large amounts of leukemia and prepare it for a bone marrow transplant. Currently this must be done with high doses of chemotherapy that also destroy the marrow, but can damage the rest of the patient. Current studies are underway to determine the effectiveness of this procedure.

In a manner similar to that described above, TAT might also be useful for eliminating HIV infected cells that express viral antigens on their surfaces that are not killed by HIV antiviral medications. The goal here would be to “complete the cure” that cannot quite be done with medication alone.
This hypothesis, that HIV infected cells could be killed by an alpha-emitting radioisotope, has been successfully tested, and these results provide support for the concept that these antibodies labeled with radioactive substance (Bi-213) can be used for treatment of HIV. Pre-clinical development testing the efficacy and safety of this novel therapy approach are being undertaken in preparation of a Phase I clinical trial in HIV infected patients.